King Hamad.. The cause of Bahrain’s deadlock rather than the ailing marginalized Prime Minister

King Hamad is no longer fit for rehabilitation because of the tragedies he brought to the country and its people, this is why the King should step down from power in order to reach a compromise in Bahrain. Although he was literally raised on people’s shoulders (with theconnotations of a popular desire for a newbeginning) in 2001 in Sitra, the mostaffected island by the repercussions ofsecurity measures in the nineties), people called in favor of his downfall publically in2011. The last of these tragedies brought by the King was the uncivilized violations of Ashura commemorations (2014). This recalls the crime of demolishing 38 Shiite Muslim mosques in 2011, an unprecedented eventto the ruling Al Khalifa tyrants. This crime is one of many others supporting the fact that Hamad Al Khalifa is the worst ruler in Bahrain’s history, and I personally classify his rule as the worst in the modern era.

The difference between the events of the nineties (1994-1998), where there was a wide rejection of the Prime Minister’s policies, the de facto ruler of the country then (not now), and the mass sit-ins at the Pearl Roundabout (February-March, 2011), where there was an unprecedented large-scale rejection of the policies of King Hamad, is mainly due to his reckless policies against the wide popular sectors. This largely exceeds the traditionaldictatorship that was exercised by a bad ruler such as the Prime Minister and is the reason why people reacted strongly and screamed: “Down with Hamad”. The majority also called for the downfall of the ruling Al-Khalifa family in the nineties when they demanded the return ofthe 1973 constitution, which governs the country in a similar manner as the Constitution of the State of Kuwait.

King Hamad cancelled the 1973 Constitution, something that was not done by the Prime Minister, who did not apply it but rather kept it on the shelf until it was needed. When the King took the throne, he classified himself as intelligent when he offered promises to the people to preserve the Constitution of the State of Bahrain. But he didn’t, however hepromulgated a new constitution, which allocated the country’s authorities to him.

Also, King Hamad practiced horrific naturalization, which reminds us of the nuclear bombdropped on Hiroshima, Japan, that was not exercised by the Prime Minister to this alarming extent. The other tragedy brought over by King Hamad of Bahrain was theinternationalization of the issue.

Furthermore, the King had exercised exclusion and cleansing of the Shiite community, which far exceeds the hateful discrimination process that we have known during the reign of the Prime Minister, Khalifa bin Salman. The King had raised the slogan “an extensive war onShiites”: both as institutions and individuals, which affected all aspects of life.

Additionally, the biggest tragedy for King Hamad was internationalizing the issue of Bahrain unlike Khalifa bin Salman who barely involved Saudi Arabia in the country’s internal issues.The Saudi army is on the ground now, and no matter how we try to soften the context, no one disagrees that their existence diminishes the country’s sovereignty. Although the Saudipresence in Bahrain is not labeled as an “occupation”, this does not deny the fact that the Bahraini decision lies somewhere between Riyadh, Washington, Tehran, and other regional and international capitals known for their decision making capabilities. Bahraini officials do not like the fact that Obama mentions their country in his speeches, but this will remain the case as long as the Saudis are directly involved in the country’s internal issues. Thus we expect that Obama will continue to blackmail both the United Arab Emirates and Saudi Arabiathrough Bahrain, while Iran, the strong regional country, will use this ideal situation tocontribute its opinion on Bahraini affairs, which are no longer internal.

In fact, the King’s catastrophes are beyond any description. They have damaged internalrelations between Shiites and Sunnis, which he considered as the greatest benefit to thepermanence of his reign because he thought that national unity damages dictatorship.
The truth is that the King did not have to wait long to harvest what he planted with his own hands. He is now confined to his palace in Sakhir and the southern region of the countrywhere he exercises his self-rule. It is difficult for him to visit Manama or any other areabecause of fear of a car bomb explosion, or being thrown at by one of the families of the martyrs (a person who lost a family member is symbolically considered booby-trapped untilfurther notice). This is something we do not wish for because it will lead the country toviolence, which the opposition is trying to avoid. However, King Hamad’s emotional andfoolish policies are not assisting this desire.

Furthermore, the King had harmed the Al Khalifa family and its political future. He also greatly harmed the future of his son, the Crown Prince. Because the King was away from the limelight during the reign of his father and uncle (1963-1999), it was easy for him to renouncetheir work publicly, and to resort to a shock technique through which he flooded the general scene with a set of unexpected positive decisions, which confused the opposition, whodepended on good intentions to support King Hamad in 2001.

Now, King Hamad has dragged his son, Salman, in the existing dirty game of politics. It will thus be very hard for the Crown to persuade the opposition to engage with him based on good intentions as they dealt previously with his father. This might take place under the assumption that Salman would actually have a place in power, or he will have a voice that is heard in his family, which does not hide its doubts. It is of no secret that the army of Khalifa bin Hamad (an army commander) lacks appreciation for the Crown Prince as the second manin the country. It is interesting that the Crown Prince is excluded from the military organization, on which King Hamad relied upon to establish his rule against his rivals: the Prime Minister (in the early years of Hamad’s rule), and his rivals, the opposition.

What actually complicates the situation is that the head of the country is in fact its tragedy. This situation was not present in the nineties, as the opposition directed their arrows towards the Prime Minister not the Amir unlike any other tyrannical countries such as Saudi Arabia, Morocco and other Gulf states, where the head of the country is generally appreciated, either because of fear or greed. Hamad, on the other hand, receives repulsion, dislike, and his picture is literally stepped upon.

Before I finish, I must point out that demanding the downfall of the King differs fromdemanding the downfall of the regime. I do propose to demand the downfall of King Hamadbecause it might open the door for national compatibility, and the start of a realdemocratization process. This will only take place when the regime equates ruling family members with other citizens, identifies the scope of authority given to the top person in the country, refers the legislative fraction to an elected parliament, and allocates the executivedecision to an elected government.

If Hamad steps down, his departure could open the door to the country’s continued existence.  This can take place by a coup within the family, which does not seem likely at the moment (as what happened to the Saudi King Saud bin Abdul Aziz in 1963), keeping in mind that the coup is exercised by of the ruling families in the Gulf, and within the family of Al Khalifa itself. Hamad can also be forced to step down through an international decision, and I personally do not think it is impossible if the opposition collectively called for him to step down, refused to deal with him, and amassed against him both internally and externally.

It is needless to say that replacing an Al Khalifa ruler by another from the same family in 1923did not change anything in the country. Therefore, the current King‘s departure will be meaningless if it is not associated with restructuring the country’s rule on the basis of this principle: people are the ultimate source of government authority 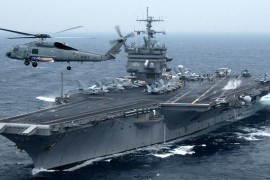 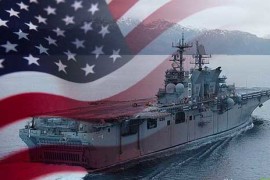 Bahrain in the eyes of the US: a giant aircraft carrier 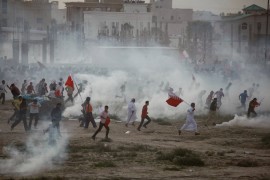 Bahrainis are divided even on National Day 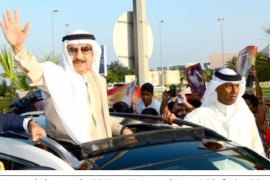