Power-Sharing in Bahrain: A Still-Absent Debate

Abstract
Bahrain was among the first Arab Spring countries in which mass protests arose in February 2011. The authoritarian monarchy, which excludes vast segments of society from fair political and economic participation, opted for the use of force to suppress the mainly peaceful demonstrations, but it could not expunge the protests by a popular movement that continues to exist to this day. The power struggle is occurring along a Sunna–Shia divide that interconnects with regional sectarian tensions. This article investigates powersharing arrangements as an option to deal with such deep divisions. It outlines the historical background of the sectarian tensions in Bahrain and the rudimentary forms of powersharing that have existed there in the past. It then analyses the current debate between the regime and the opposition regarding the distribution of political power. While the reality still seems to be far removed from a power‐sharing solution, we nevertheless recommend power‐sharing as a feasible way out of the current stalemate.
Read more about: Power-Sharing in Bahrain
Tags 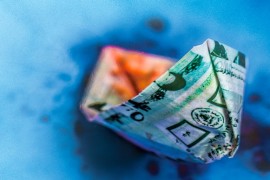 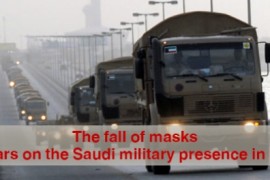 The fall of masks: Two years on the Saudi military presence in Bahrain 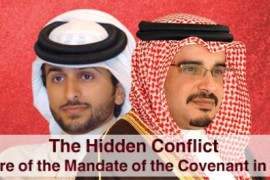 The Hidden Conflict: the Future of the Mandate of the Covenant in Bahrain 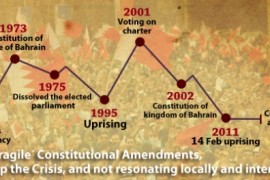 Bahrain: “Fragile” Constitutional Amendments, boosting up the Crisis, and not resonating locally and internationally